A couple of weeks ago, I released a beta to the tester group, and they’ve provided a huge amount of feedback and ideas to help improve the game. The quality of the feedback is outstanding, and their impressions of the whole thing were generally good! The story/plot was well received, which was something that was bugging me in the back of my head. The main issues revolved around some game-mechanic comprehension and the early game’s difficulty curve.

Alicia levels up while playing with close and long-ranged combat

The game is not designed to spell out every aspect of the engine to the player. I’ve always liked games with mechanics that are never explained but seem to be working in the background. Or, for instance, I find it rewarding when I discover a mechanic I could perform right from the beginning of the game. However, essential mechanics should almost always be explained in some way, and I missed doing this with a couple of things.

One of these things was the level-up system: leveling-up increases your magic attack and your defense, but nowhere is this ever mentioned. Originally, you could only level up from level 1 to 10, so any level ups would change your stats right away and you’d definitely notice. However, long ago I went back and made the game support levels 1-99, so the effects of leveling-up weren’t as clear now. 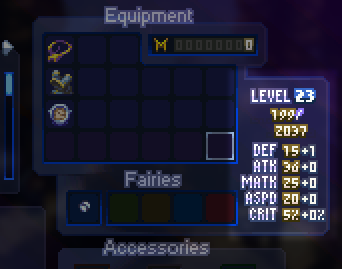 To fix this, I implemented a small stats window in the inventory screen (pictured left) to show the player her/his growth as she/he levels up. DEF and MATK increase automatically at different intervals, and they now clearly tell the player something’s happening. There were also a couple of other obscure power-up mechanics that I ended up making a bit clearer.

Another thing that was in need of revisions was the difficulty curve in the early forest area. The game is not meant to be an easy game, but rather a medium challenge. It takes a bit of time for a new player to get used to the physics and mechanics of the game. Since this part of the forest is an early area, the player was being asked for too much too soon. The introduction of the game plus the forest area work as ‘tutorial’ areas without being obvious about it. 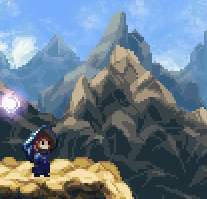 Thus, some rooms needed to be changed in design, some enemy patterns tweaked and some extra HP given at the start of the game to make this an easier and less frustrating experience.

Now that this stage of testing is over, all effort’s going to developing the desert areas. This part of the world is designed to be much more open than any of the areas the player has visited before, so it will feel like a breath of fresh air. Hopefully it’ll be a lot of fun to develop it!


Oy ! Following your blog. The game you’re working on seem very beautiful, and i’ll definitely wait till the release. Just to seeing it moove hypnotize me.
Wich you good luck for the rest of this amazing project.
Cheers from france !


This game is breathtakingly beautiful :) I’m really impressed by what you have accomplished and am definitely looking forward to play it once it’s out! I hope it will be as fun playing it as it’s watching your .gifs/screenshots :)


Thanks! Happy to know you’re looking forward to the game.
More exciting content will be coming in the future, keep an eye out for it!


This game looks like intriguing and I’m looking forward to playing it whenever it’s released!
America approves :)


Is beta testing over? If not, can I become a beta tester?