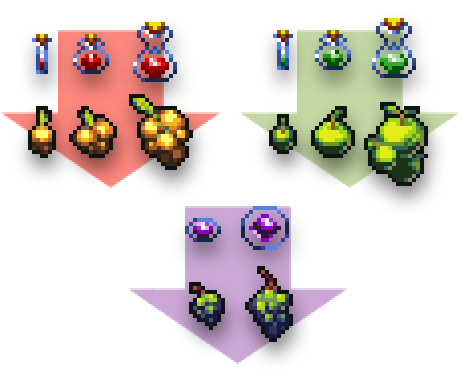 Status Refill Items, before and after

I recently had a bit of a drawback with the way I’ve been working. Except for a few side-jobs, most of my days consist of a 12 to 14 hour routine of work at the computer. Everything had worked for me until about a week ago, when I made the last update. Probably thanks to overwork, I had a rather unproductive week. I decided not to work on the game on Saturdays or Sundays, and apparently that’s made a difference! The rule is not to open the game’s source file, but I can still work on some side-graphics or otherwise unimportant stuff. Things are beginning to flow nicely again.
I decided to re-sprite the refill items (pictured above) and status powerups. These were at least 6 or 7 year-old sprites, so they were in desperate need for an update. There are a few other graphics that are in the same situation. I have to figure out if it’s worth replacing some of them, depending on how often they appear in-game.

Also, I’ve been working to replace some placeholders with actual graphics. This little girl pictured above is Linna, a wizard Alicia meets in the forest under compromising circumstances. I’ll keep you posted as I work on more things.


Love those bottle sprites. Been following this project for years, and it’s nice to see the updates :)